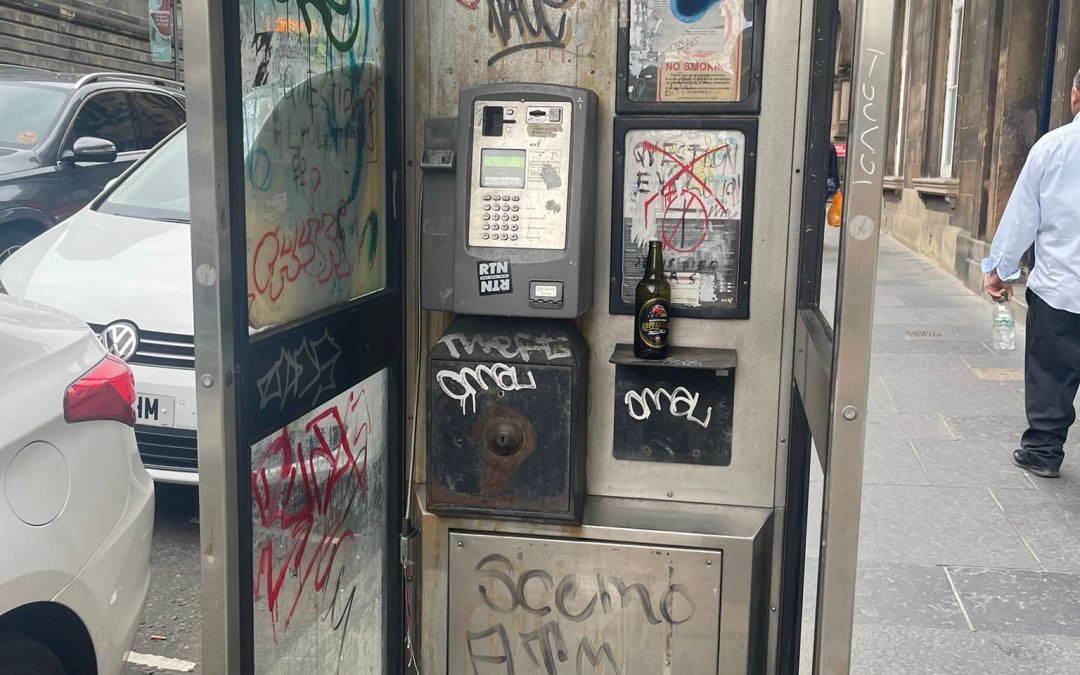 We are all aware that pavement space is at a premium in Edinburgh. As a historic city, we have a challenge to make our pavements safer and more accessible to people who may be wheelchair users or pushing prams and buggies.

The work to make our city more pedestrian friendly has been ongoing for a number of years and is a live conversation thanks to campaigning grassroots groups such as Living Streets. Work to introduce ‘drop kerbs’ and a city-wide ban on A-Boards have all had a positive effect but there is work still to be done.

Recently a light has shone on the pavement real estate taken up by BT’s phone kiosks. Often smashed, covered in graffiti and rendered unusable, in some areas of the city there are even multiple kiosks in a row. The good news is that Ofcom who previously enforced a minimum requirement of number of kiosks in a given area has modernised their guidance. This now allows BT an opportunity to expand their program of removing unnecessary derelict or underused kiosks and in the process freeing up the pavements to pedestrians.

This comes, however as they are moving to install their ‘street hub’s. The new Hubs – which have already been set-up in 23 UK cities including Glasgow, London and Birmingham – are touted as a modernisation of the classic telephone box – offering free Wi-Fi, calls, phone charging and maps and directions. They also offer to provide free digital advertising space for the council.

What I have been clear on in my contact with BT is that the merits of installing the new Hubs should be discussed entirely separately from any efforts to refurbish, remove or in the very least ensure their current Kiosks are maintained to an acceptable standard. BT argues that they would remove 35 dilapidated payphone whilst installing 17 ‘Street Hubs’ in their place but their plans were kiboshed when all applications were dismissed by council planners. In their words the 75-inch LED displays amounted to an “unacceptable and unnecessary intrusion into the streetscape” and they stated they would amount to “advertisement clutter”. I would also add that in my discussions with BT encouraging them to clean up their act there was no mention of the Council (and therefore public) receiving any kind of revenue in return for hosting these quasi-billboards.

The SNP (with support from some cross-Party cllrs) have secured a clean up of EH1 and EH2 phone boxes, and are determined that further works will not be conducted whilst holding the council to ransom over permission to install their new offering. Watch this space!